Is it time yet for my first race in Canada?

I feel like I blinked after moving to Canada mid-February and now 4 months have passed. Four months packed with adventures – run-exploring the Rocky Mountains – often involving hands-on-ground/rock scrambling in order to not fall off a mountain, crossing rivers in search of trails, venturing into ice caves, glissading through snow and frequently falling into it (good it’s soft and deep here), ridge-running at its absolute best, getting in contact and up close with wildlife (literally ran into a bear which was just 5 m away from me), and always, always being taken aback by the sheer beauty of Canada. It’s a RUNderful life here 😉

Not to mention the incredibly friendly Canadians that I meet along the way! Even though, I only recently met the guys from SkiUphill/RunUphill (check out their store if you’re around Canmore) during my friend Adrien‘s personal challenge to run the Canmore Quad (summiting the 4 main peaks in Canmore – Grotto at 2706 m, Lady Mac at 2605 m, EEOR at 2571 m, Ha Ling at 2408 m in one continuous effort), they straight away got me involved in the 5peaks event. The 5peaks trail running races take place across Canada in some of the most spectacular natural places, welcoming all types of runners and sport enthusiasts.

Canmore is an endurance-junkie town and thus, it only seemed fitting that my first race in Canada would take place at the Canmore Nordic Centre, the home training facility of some of the best cross country skiers in Canada. Since I had never participated in the 5peaks events before, I was looking forward to seeing what it was all about. However, the morning of the race was a bit of a whirlwind… nearly missing the start as I got the times wrong (it started at 8:15 am instead of my believed 8:45 am start), meant I had to do a cold start with a rather sleepy body (I am not a fan of getting up at 6 am on weekends :-/).  The course was nicely runnable and absolute fun, with great single-track trails with rooty and rocky underfooting – it meant it was play time!

At the start I tried to keep up with the men including my friends Joel and Adrien but obviously got dropped rather sooner than later. And as expected, the first 5 k were tough,  because of a) being uphill, b) my muscles being cold and c) mostly training for ultras means it takes bloody ages to get into your running. In addition, I briefly questioned my sanity (don’t worry, I perform this action rather frequently with no clear outcome so far 😉 – ‘why wasn’t I nicely curled up in bed still or just about having a nourishing, and relaxed breakfast instead of huffing and puffing up some hills???’. But then I got into the running and simply enjoyed myself on the trails; the downhills were just so so much fun! Nevertheless, I was slightly worried that a speedy mountain running woman would pass me any time as I had seen some strong looking legs at the start line (#quadgoals). So, I kept on pushing onwards.

The last ~2 k were downhill which is my favourite way of finishing a race – it nicely dilutes the prior mental and physical struggles by pouring out even more endorphins that rush through the body and lead you to sign up to more races, longer distances, earlier starts…Oh, what a bliss selective memory loss can be (lols)! Luckily, I do not forget when a race goes well and the 5peaks half marathon went well indeed. I managed to finish 1st female and 7th overall with a time of 2:00:24. Most importantly, I had a great time, met some great fellow runners and received my first Canadian medal, which by the way has a really cool design (in my opinion). I can highly recommend the 5peaks running events to anyone who wants to have a great time out on some beautiful trails. Thanks again to SkiUphill/RunUphill for getting me involved in the action! 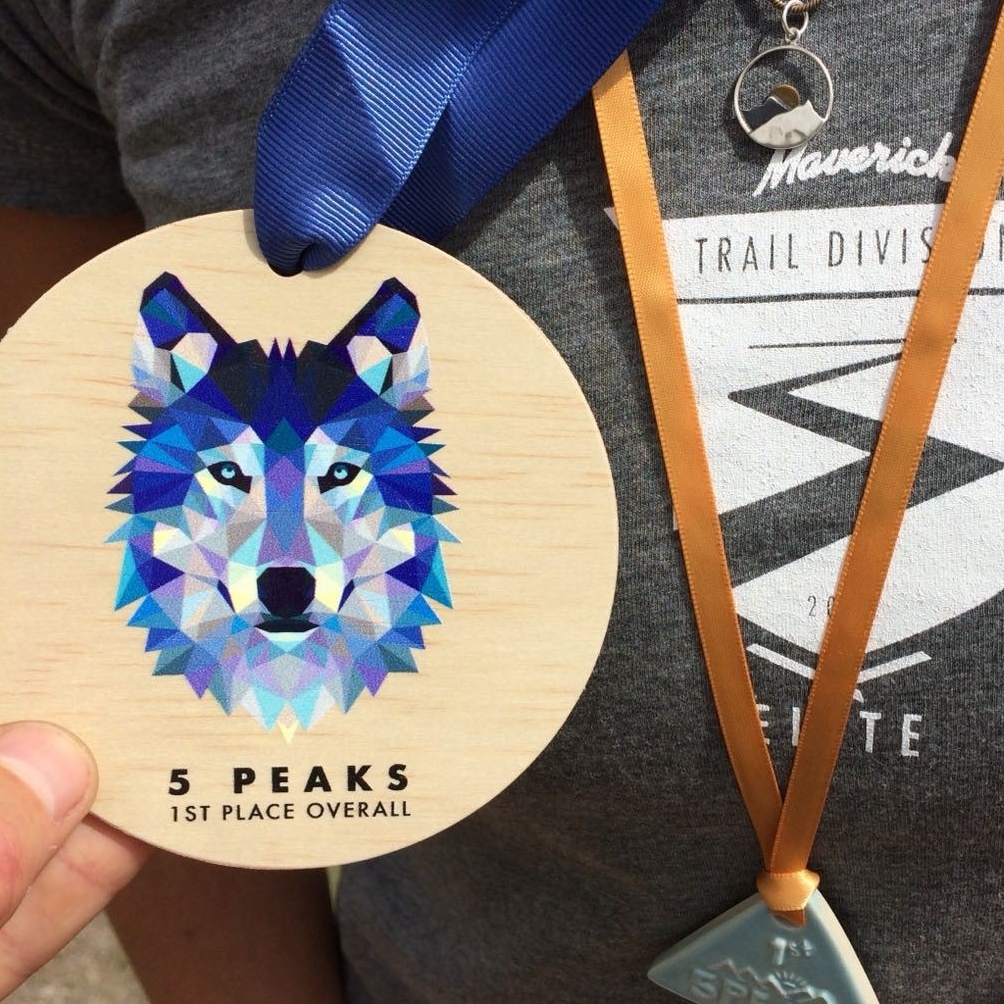