Taper week before the Squamish 50 miler and a smokepocalypse was in full swing. Days were dark and dreary in the normally scenic city of Calgary (and anywhere else)…a perfect reflection of my mood! Although, I had made it into taper week (yay), my body really put on a grand revenge show this time around – my running mojo had left me entirely, my foot played up, and I simply wanted to hibernate. Even my appetite was gone – ‘What the f**’!

I had around 7 days to sort myself out and I was wondering what kind of race I would have. Squamish was meant to be my trail ultra comeback after my stress fracture derailed me onto the sideline – it was supposed to be a good one back, an affirmation, a confidence builder. An action plan was needed which enfolded as such – sleep, sleep a bit more, try to eat, go to work, sleep and eat again and basically no running (very complicated, I know 😉 ).

Race weekend. After a long car journey from Calgary, AB, to Squamish at the west coast of BC, my fellow Bow Valley runners Joel, Gavin, Dustin, Dave, Elizabeth, Adrien and me went for a short 30 min shake-out run on local trails. While the trails were just incredible and so much fun to run on (think single-track, rooty, dusty trails through enchanted forests), my foot was worse than anticipated even though I mostly rested (meh). Worry and doubt filled my thoughts – ‘Has my mind enough energy to handle pain from START-TO-END? Do I WANT to handle pain the entire time? Am I going to break something AGAIN?’ Equally I knew that at this time, there was nothing to be done…

The morning of the race day, the alarm went off at 3:30 am. The next hour played out as a blur of gear-assembling, forcing some banana-peanut-butter bread down into my stomach, visiting the toilet excessive amounts of times, worrying a bit more about the foot and getting lost on the way to the start line (lols) – navigational skills on point 😉 Getting out of the car, I spotted her – baggy shorts lover and ultra running superstar Courtney Dauwalter. In case you haven’t heard of this badass lady, she just won the famous Western States 100 miler after also winning the Moab Ultra (just a mere 238 miles) – rad! I got excited and nervous which triggered another series of watering the flowers in the dark. While it’s pretty safe to say that I am not being followed by tons of trail runner eyes when I sneak to the bushes (puh), the same doesn’t hold true for Courtney. A couple of jokes about the rather bizarre peeing situation for Courtney were exchanged between Karl, Tyler, Adrien and myself before no other than the Barkley legend Garry Robbins counted down to the start of the Squamish 50 miler – 3, 2, 1, …GO!

Keeping Courtney in sight, I and fellow runners darted ahead with our head torches illuminating the path. The 10 km to the first aid station were flat and runnable so I decided to try and keep up with the front pack. Courtney was just in front of me for the first 3-4 km, grabbing my entire attention (such a fan girl 😉 ). Then, she slowly pulled away and I never saw her again until after the finish line. I came into the first aid station in 46 minutes, grabbed another flask of Tailwind from my crew excellence Adrien, and trotted on. Feeling good and the foot being manageable, I settled into my running and enjoyed the single-track trails ahead of me. They were so much fun!!! And having trained on technical terrain and at altitude, I felt comfortable climbing the first ascents. Cruising into aid station 2, I knew that I wouldn’t see my crew for the next 33 km, so I stopped just long enough to say hi, get more Tailwind and shot bloks on board, and headed out towards the largest individual climb of 760 m of the course, also lovely named Galactic Scheisse.

Around 35 km in, I noticed that my stomach was upset and nausea kicked in. I felt fine otherwise, energy and legs were good. I was slightly annoyed but thought I should just take it a bit easier on the climb and make sure to hydrate well. I caught up with some guys and stayed behind them, and like a caravan we silently climbed up until hitting the downhill. The downhill was fun, but I noted to myself that I still have work to do on my downhill running skill as the guys quickly dropped me – that annoyed me even more than my stomach, lols. At 53 km, I was excited to see my crew again. So many people were cheering and I briefly had difficulties spotting Adrien in the crowds – apparently he even took of his cap and sunglasses making it even harder to spot him (although I can’t remember)…He offered me gels and shot bloks, but all I wanted was a coke. Oh, the sweet taste of way-too-much sugar mixed with caffeine. While relishing the coke, Adrien asked about my foot. I hadn’t thought about it much until that point as I was more worried about throwing up. Now, I noticed that my foot wasn’t the happiest chap. Gavin and Adrien suggested to take a paracetamol and so, I obeyed in the hope that it would kill two birds with one stone – stomach and foot.

As I set out for the last 27ish km, I set my focus back on just doing my thing, paying attention to how I and my stomach felt, and keeping the effort level in check – and of course have fun along the way! Even though the trails were runnable and fun, being undulating mountain bike trails, my stomach didn’t want to play balls and forced me to hike most of the uphills. Still, I loved the trails, and the black bear that greeted me from a fallen tree – we exchanged some eye-to-eye contact but minded our own business in a respectful manner ;-). These animals are so beautiful and it’s such a privilege to witness these animals in nature. This course leg not only surprised me with the encounter of a bear but also seeing Joel briefly at a trail crossing gave me a boost to forge on. Nevertheless, the going got harder as my stomach refused to settle and the temperatures crept up. I told myself ‘just get to Adrien at 70 km and then it’s only 10 k’. Adrien did a fantastic job of shouting me into the aid station, where I told him that ‘my wheels are coming off’. He made me drink another coke, knowing that I am an addict ;-), and cooled me down with water. After a short pep-talk ‘it’s only 10 k, 10 k, one beigel run (it’s a London thing), you can do it’, I was on my way determined to run down that 10 k. My boost lasted until the first uphill and the realization that there is more climbing in the final 10 k then I thought there was… I think I even swore at some point – not sure whether in English or German though 😉

Not to be a negative Nancy, but I hated the last climb (Mountain of Phlegm) and downhill. Usually, I like the climbing but this climb felt steep (I am sure it was even though it probably wasn’t that steep). Once on top, a volunteer informed me that it’s just downhill and flat to the finish from here. Not knowing what the downhill entailed, I yelled at him that he just made my day. But then I had to realize that the downhill involved sets of ridiculously steep stairs, necessitating a bit more swearing while clinging onto the handrail…before being spit out onto a road leading to the finish line. Crossing the finish line, I was SO HAPPY to be done and coming in in 4th place for the women in 9:28 hours. While Karl won the 50 miler and Joel got 9th, Tyler got to run 40 km with Courtney which I think is the coolest thing ever. Next time, I just try to keep up with her for 10 km so I can chat to her and then drop 😉  And Liz got 10th woman so overall a strong performance from the Bow Valley runners! I can only recommend putting Squamish on your list, sign up quickly when registration opens and enjoy the single-track trails in this amazing place! 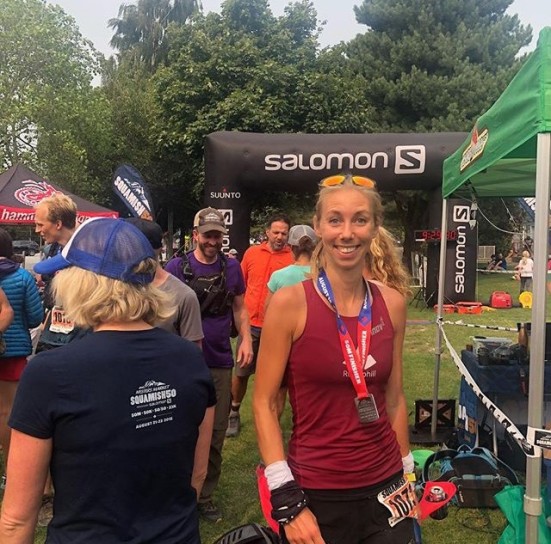