One of the main reasons for moving to Canada was obviously the mountains! Having the vast Rocky Mountain range at your footstep is a trail/mountain runners dream (although your body might not always agree with that). There are gazillion of summits and trails through this breath-taking landscape and the itch to go out and climb/run them all is real! But, it is still winter which in Canada means freezingly cold temperatures and tons of snow. So, a rather unorganised, often underprepared rookie like me is at risk of losing some extremities or freezing into an ice sculpture…and probably not a pretty one either – imagine my painfully warped face.

Thus, one of my first actions after moving to Canada was to meet like-minded running nutters to learn about trails/routes and get inspired by their running adventures. The Calgary Trail Runners meet twice a week and are an incredibly welcoming bunch of people that love running no matter what the winter conditions throw at them. And they participate in various crazy races offered in Canada and beyond – spot on, I found my group 😉 At one of the Saturday outings in Bragg Creek, one of the regular runners, Joana Ford (check her out – she is one incredible mountain runner), told me about her Sunday adventure plans; going up Moose Mountain. Of course, I was all games for it, although I hesitated when she mentioned that I could bring an ice axe 😉 What was I getting myself into??? Well, you have one life to live so better live it up a bit, right?

The next day, I met her and her friend, Patrick Seymour, at the parking lot of Canyon Creek Road close to Ing’s Mine at 8 am. The plan was to firstly visit some ice caves before making our way up and along a ridge over to the summit of Moose Mountain. We started running and it was COLD…I remember thinking that I am not sure whether my body can handle these temperatures for 8 hours, especially knowing that it would be even colder on the top with the exposure and wind. But equally I didn’t get up that early to chicken out and thus, just hoped for the best – although noticing Joana’s frozen eye lashes didn’t really calm my nerves…Luckil 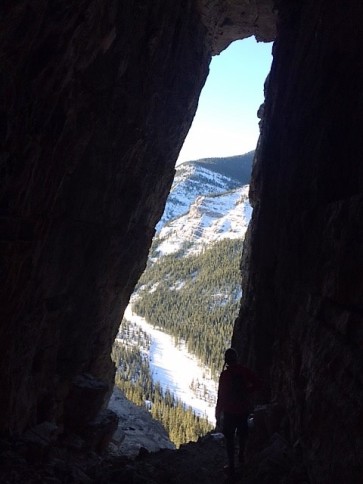 y, it was a beautiful day and as soon as the sun came out, it started to warm up ever so slightly (and that makes all the difference). After 11 km, we reached the first ice cave and Joana showed me its interior. I had never been in an ice cave before and it was fascinating. We moved further inside the cave with our head torches illuminating the ice formations and cave walls. Then, we reached a very narrow transition from one cave chamber to the next and Joana asked me whether I’d be comfortable squeezing through. I said ‘yes’, although I was worried I might get stuck. In the most inelegant way possible, I crawled on all fours through the narrow section – it was a nice reminder that I should do more yoga for flexibility 😉

After the cave exploration, we scrambled upwards over a boulder field covered in sections by snow and ice. I frequently sled downwards on the loose rocks while Joana and Patrick made the ascent look effortless…Once at the top, the views were phenomenal. An endless sea of mountain peaks wherever you look, including our destination for today. Running along a nicely exposed ridge line across another peak towards Moose Mountain was a lot of fun (check out ridge running in a video Patrick made), although very cold at times, thanks to the gusty winds up there. It also involved some more hands-on scrambling along rocks and ploughing through snow. Once we reached the summit of Moose Mountain, we obviously took the time to refuel – in my case it meant eating a frozen mars bar 😉 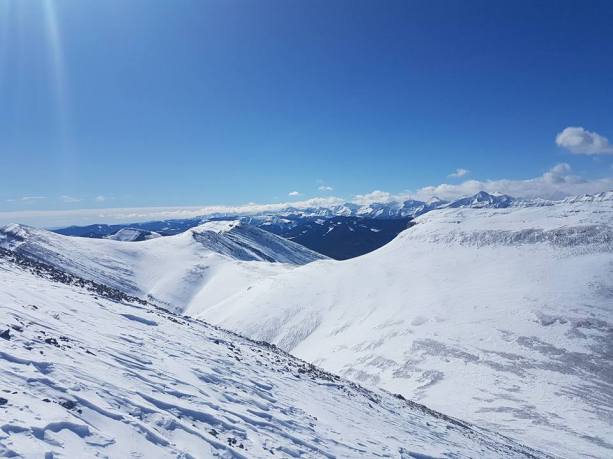 From the summit, we dropped down through a gully. Joana and Patrick introduced me to the skill of glissading (or as I would call it ‘bum sliding’) down steep slopes – so so so much fun as you accelerate and pick up some decent speed until you hit some serious snow bumps with your bum (ouch!). However, given the tons of snow that had fallen over the last weeks and months, the snow down in the gully was hip-deep and so we had to plough through it, exhausting ourselves. Sinking into such deep snow also means banging your shins and knees onto trees and rocks which are covered underneath the snow…we even resumed to crawling, which actually was the only way to move forward at times. I can tell you, my legs did not like this at all and they were nicely bruised in rainbow colours after 😉 But it was all so worth it – a day well spend outside with great company and I am absolutely hooked on summiting more peaks! 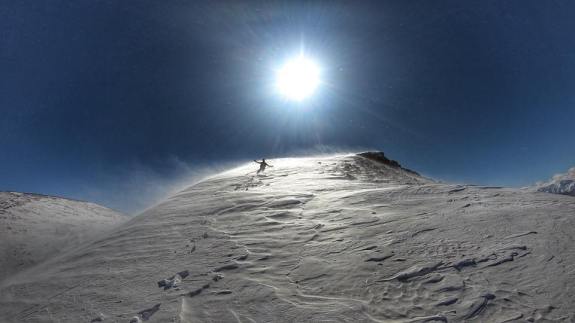 Thanks to Patrick for capturing the glissading action

The following weekend, I went out to Banff to meet my friend and Maverick team mate Adrien for some more summiting. This time EEOR (East End Of Rundle) and Ha Ling Peak were on the menu. The trails up these two peaks both start from the Goat Creek car park of the Spray Lake Road. The weather was superb with sunshine but rather cold again (I guess you have picked up on the theme by now ;-)) We decided to attempt EEOR first, followed by Ha Ling. As no one had been up EEOR since fresh snow fell, it meant that we had to break the trail even though we did not know where exactly the trail was…so we followed our noses up the mountain and since we did not know where the trail was, we decided to go along the snow-covered ridge to the top. This was a rather reckless decision as we had to scramble along the ridge with deep snow and some deep drops on either side. And climbing along rocks with thick gloves/mitts is dangerous in itself…thus, it was hard to fully take in and enjoy the views along the way as my eyes stayed peeled onto the task ahead and the best spot to safely position my foot next. 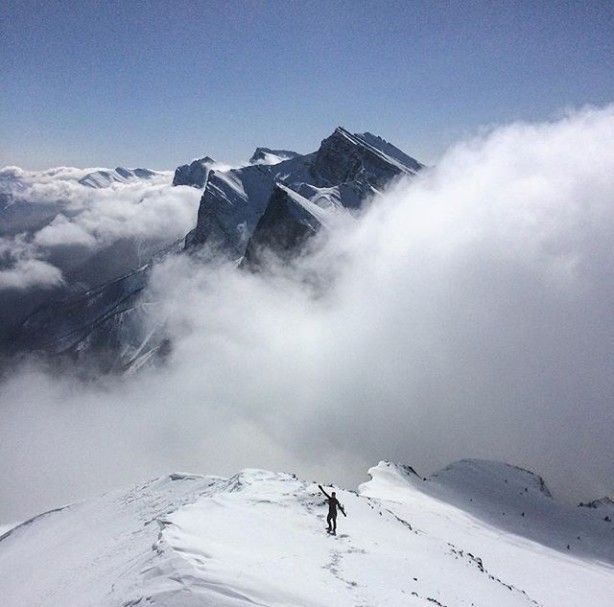 The views from the top were absolutely stunning and we could see our next destination, Ha Ling, on the opposite side. However, we first of all had to safely make our way back down, which developed into a tedious, nerve-wrecking task seeing that losing grip on the ridge would easily result in sliding down the steep drops on either side and… We were both incredibly relieved once we made it back down and after a quick refuel stop at the car (yummy cliff bars), we headed back out and up Ha Ling. The trail leads through switchbacks up the mountain, until leaving the treed area. Although it is a rather steep trail, it was nicely packed and made for a comparably easy ascent. After the obligatory summit pic, Adrien and I enjoyed the run back down – picking up speed, opening up the stride, and maneuvering through trees. It was also a great workout for the quads 😉 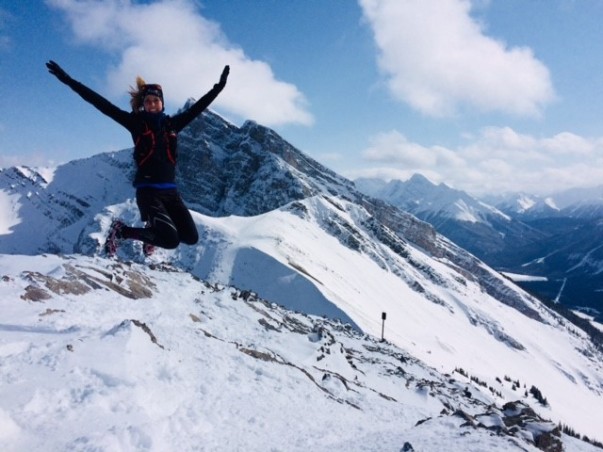 Due to the sheer number of summits in the Rocky Mountain range, I have now started to compile a list of Rocky Summits I climb and can’t wait for more epic summit adventures. Or if you have suggestions which peaks I definitely should conquer, let me know.